Presented by: The Cosmopolitan Club of Norfolk

Final registration and cancellation deadline is March 31, 2019. We are expecting ~325 guests and seating is limited, so please reserve your seat or table soonest. Please send questions to norfolkcosmofoundation@outlook.com 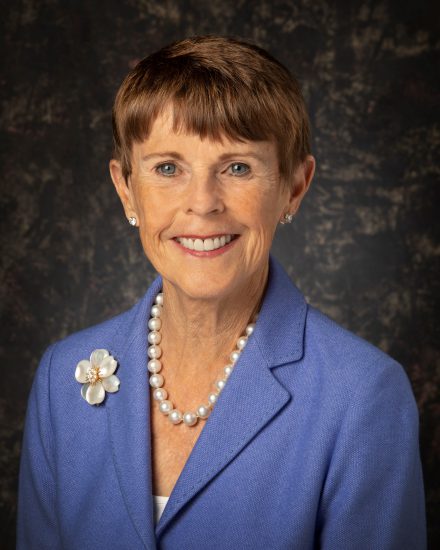 A native of Norfolk, Virginia Joan graduated from Longwood University with a Bachelor of Arts Degree with a minor in Mathematics. Fascinated by the visual arts while volunteering as a museum docent, she returned to university to earn her Master of Arts in Humanities. Steadfast in her community efforts, Brock dedicates her knowledge and skills to organizations and programs that benefit culture, education, and community. She has chaired the board of Virginia Wesleyan College, the Access College Foundation and was the first woman to preside over the Chrysler Museum Board. She currently serves on the National Board of Women United, an affiliate of the United Way. Mrs. Brock has served on the Sentara Board of Directors and served as chair of the Sentara Foundation. She currently serves on the Hampton Roads Community Foundation board.

Devoted to the Hampton Roads community, she and her husband established the M. Foscue Brock Institute for Community and Global Health at Eastern Virginia Medical School. With their interest in protecting our environment, they helped fund the Brock Environmental Center in Virginia Beach. The Brocks have received many commendations for their commitment to giving back. Most recently, they were recognized as Health Care Heroes for their participation in health-related philanthropy by Inside Business magazine and were honored as Outstanding Philanthropists by the National Board of American Fundraising Professionals in 2015.

Joan Brock is the widow of Macon Brock, co-founder of Dollar Tree Stores, Inc. She worked as part of the administrative team of the company for over 30 years. She and her husband had been married 53 years, with three children and six grandchildren.

Dr. G. William Whitehurst – 2014. Dr. G. William Whitehurst is a native of Norfolk, Virginia, and was educated in its public schools. Following military service in World War II in the U.S. Navy, he attended Washington and Lee University where he received his B.A. in History in 1950. He received his MA. in History at the University of Virginia in 1951, and his Ph.D. in American Diplomatic History at West Virginia University in 1962. In 1950, he began his teaching career at the forerunner of Old Dominion University, the Norfolk Division of William & Mary, as an instructor in the History Department. In 1963, he was appointed Dean of Students and held that position until his election in 1968 to the Ninety-First Congress as the Representative for the 2nd District of Virginia. A Republican, he served until his retirement from the House of Representatives in January 1987. During that time he served eighteen years on the House Armed Services Committee, six years on the House Select Committee on Intelligence, and two years on the House Committee on Standards of Official Conduct (the Ethics Committee). Additionally, he served for ten years as a delegate to the North Atlantic Assembly, the parliamentary arm of NATO, and three one-year terms on the Board of Visitors of the United States Naval Academy. Dr. Whitehurst kept a diary of his Congressional activities during his years in the House and subsequently published two volumes of excerpts covering the years 1972 to 1981. They are DIARY OF A CONGRESSMAN and DIARY OF A CONGRESSMAN: ABSCAM AND BEYOND. The original diary detailing his entire career from 1969 to 1987 is now at the Perry Library at Old Dominion University and is available for research purposes. On his retirement from Congress, Dr. Whitehurst returned to Old Dominion University to resume his academic career and is currently the Kaufman Lecturer in Public Affairs. He teaches courses in both history and political science.

J. Douglas and Patricia W. Perry – 2015. Known simply as Doug and Pat, the Perry’s live the example of what it means to be leaders in their community. Together, they have extended guidance and philanthropic support to numerous charitable organizations, including The Chrysler Museum, The Hurrah Players, Governor’s School for the Arts, The Virginia Stage Company, Slover Library, The Salvation Army’s Kroc Center, Virginia Symphony Orchestra, Virginia Arts Festival, Old Dominion University, Access College Foundation, An Achievable Dream, Samaritan House and many more. When one of the Perry’s three children created a plaque in kindergarten that read: “My mom makes pies. That’s all she does,” Pat decided to return to college. She enrolled at Old Dominion University, balancing the care of her family with a demanding academic load and earned her bachelor’s degree in 1989, graduating with honors. Since graduating, Pat has served on the University’s Board of Visitors, the Chair of the Institutional Advancement Committee, and as a member of the Academic Affairs Committee. She has also served as Vice Chair of the Governor’s Board on Child Abuse and Neglect, a board member for Samaritan House Safe Harbor Center, the Vice President of the Board of Trustees for St. Mary’s Home for Disabled Children, a member of the First Lady of the Commonwealth Advisory Council and a member of the board of The Virginia Stage Company. As a co-founder of Dollar Tree, Doug is a recognized business leader in the Hampton Roads community. He, along with his partners, Ray Compton and Macon Brock, strategically built Dollar Tree from a single store to the nation’s largest single price point retailer. Doug retired as an officer of Dollar Tree in 1999 and continues to serve on the company’s board of directors. Doug has held positions on various boards and committees over the years, including Chairman of the Board of Trustees for Cape Henry Collegiate School, Treasurer and Executive Committee member for Old Dominion University Educational Foundation, board member for the restoration of the USS Wisconsin and board member of Bon Secours Medical Center. He also served several years as a board member for The Salvation Army’s Tidewater Area Command. The Perry’s were honored as the 2010 Outstanding Individual Philanthropists by the Association of Fundraising Professionals – Hampton Roads, and have received ODU’s Batten Award, which symbolizes their philanthropic support and guidance for the University.

The Honorable Paul D. Fraim – 2017 Paul Fraim was born in Norfolk, Virginia, graduated from Norfolk Catholic High School, completed undergraduate studies at Virginia Military Institute, received his Masters of Education from the University of Virginia, his law degree from the University of Richmond, and was awarded an honorary Doctor of Laws degree from Norfolk State University. A member of the Norfolk City Council from 1986 to 2016, was appointed mayor on July 1, 1994 and re-appointed every two years until May 2006 when he became the first popularly elected mayor since 1916. He was twice re-elected mayor and did not seek re-election in 2016. He is the longest serving mayor in the history of Norfolk. Mr. Fraim began private practice in May 1977 and is president of the law firm Fraim and Fiorella, P.C. He is chairman and president of the Slover Library Foundation, a member of the Eastern Virginia Medical School Board of Visitors, Board of Trustees for the Chrysler Museum of Art, Towne Bank Norfolk Advisory Board, the Greater Norfolk Corporation, the Virginia Arts Festival Board of Directors, Nauticus Foundation Board, and the VMI Investment Holding Board. He is a former chairman of the Hampton Roads Mayors and Chairs Caucus, Hampton Roads Planning District Commission, Hampton Roads Transportation Planning Organization, Hampton Roads Military and Federal Facilities Alliance, USS Wisconsin Foundation, and Norfolk Electoral Board. His is past president of the VMI Board of Visitors. Mr. Fraim is a former member of the Hampton Roads Transportation Accountability Commission, Eastern Virginia Medical School Foundation, and the TowneBank Board of Directors. He was co-captain of the football team at VMI and coached football at the University of Virginia and the University of Richmond. The Norfolk Sports Club named him “Man of the Year” in sports in the metropolitan area for 1994. In 1995, he received Old Dominion’s “Bud Metheny” award, and was named “Sportsman of the Year” in 1996 by the Virginian-Pilot. He has been inducted into the Hampton Roads Sports Hall of Fame. Other awards include the United States Navy’s Superior and Meritorious Public Service Award medals, the National Conference of Christians and Jews Humanitarian Award, Downtown Norfolk Council Lifetime Achievement Award and Downtowner of the Year, “Colgate Darden Scouter Citizen of the Year” award given by the Tidewater Council of the Boy Scouts of America, Hampton Roads Maritime Association’s Port Champion Award, Catholic Charities of Eastern Virginia’s Bishop’s Humanitarian Award, A Home for Every American Award given by the U.S. Interagency Council on Homelessness, Hampton Roads Realtor’s Association’s Housing Advocate of the Year, Chesapeake Climate Action Network’s Coastal Climate Champion Award, For Kids 2014 Phoenix Award’s Children’s Champion, the 2017 Lifetime Award of Service from the Norfolk Environmental Commission, and the Urban Renewal Center’s Lead Like King Award. Mr. Fraim is a member of the Virginia State Bar. He is a member of and served on the Executive Committee of the Virginia Bar Association, and is a fellow of the Virginia Law Foundation.

An outstanding project of the Norfolk Club is the annual awarding of the Cosmopolitan Distinguished Service Award medal to Norfolk’s First Citizen, selected each year by a non-Cosmopolitan group of Norfolk citizens from nominations submitted by the general public. This has been a continuous event since its inception in 1928.

The concept of the “First Citizen Award”, as it has become to be known, originated from the mind of Charter Member Thomas A Hanes of the Norfolk Club who himself was honored by becoming the first Cosmopolitan ever to receive the award as its Forty-Eighth Recipient in 1971, one year before his death. Harold C (Hap) Hoy, Past President of the Club in 1978, became the second Club Member honored with this prestigious award in 1995, its Sixty-Eighth Recipient.